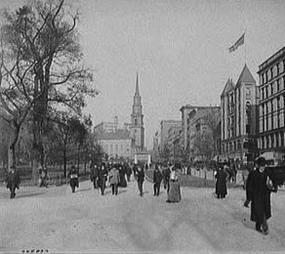 Bonnie Hurd Smith, the founder and principal of Hurd Smith Communications, is descended from a number of old Boston families who valued education, ideas, cultural and civic engagement -- and the printed word.

Eventually, Hurd & Houghton became publishers themselves, as well as printers.

Bonnie's grandfather, John Coolidge Hurd, a Harvard graduate, continued the family interest in books and publishing by working for Boston paper companies and for Hurd & Houghton before enlisting in the Navy during WWI. During WWII, he trained officers for duty eventually achieving the rank of Commander. He also continued reading, collecting rare books, and passing on the family's literary tradition to his children and grandchildren.

So...Bonnie grew up in a household (in Concord, Massachusetts) steeped in history and a love for books -- creating them, as well as reading them!

When Bonnie founded Hurd Smith Communications a little over 20 years ago (after learning a whole lot in the Boston Museum of Science's publications office), her singular service was graphic design and she became well versed in working with printers and insisting on high quality. But as a life-long writer, Bonnie's services quickly expanded.

At the same time, Bonnie's research in the field of women's history and local history quickly gave way to the family publishing tradition and she began to self-publish. Her first title appeared in 1998.

Since then, Bonnie has published eight of her own books, three e-books, and she has helped dozens of clients publish theirs -- by providing creative services, or by serving as publisher.

Bonnie believes that everyone has a book in them.

is the proud publisher of Salem's Forgotten Stories, a series of books about the

from the Civil War era to the present, drawn from the Nelson Dionne Salem History Collection at Salem State University.

Bonnie Hurd Smith is available for speaking engagements -- in person is best, but she can also visit you via Skype!